St. Mary’s Nursery and Primary School is in Butemba Sub Country, Kyankwanzi District, Kasiribya parish, in Lusaka, Uganda. The area surrounding St. Mary’s has three churches and an additional school as well as 250 households. But the current water source is dangerous. The water in the watering hole is deep enough that it requires a wooden platform along the edge to allow the villagers and village children access to the pool without falling in. However, these types of watering holes have a higher drowning risk than a shallower pond as not many of the children will have had a chance to learn how to swim. There is also a risk of wild animals and snakes visiting for their own drink of water.

These types of water sources are common breeding grounds for the organisms that cause typhoid and many kinds of diarrhea, causing many infections. An adult can spend two weeks sick, losing not only the two weeks of wages, but also the cost of the cures, which can be another two weeks’ worth. The children aren’t as cautious as the adults. They won’t always wait for a caretaker to boil water for them to drink. When they get ill, they miss school, and depending on the timing of the illness, they could lose a whole year’s progress by missing their exams. The children are also at a higher risk of dehydration and death when they catch these types
of illnesses.

We know that water is at the core of the poverty cycle in the area. When the villagers are sick, they cannot work, and most medicines and doctor’s visits require on average a day’s wage for a dose. This means that either another adult has to work to cover the costs,
or the person in need of treatment has to use his wages when he returns to cover the cost. One illness can jeopardize job and food security for a whole family.

We also expect that with a clean water source nearby, the new school will see an increase in attendance as children aren’t sent to the ponds on water runs any longer. And people from the surrounding area would be more likely to send their children as well. Most schools in Uganda offer boarding to children who don’t live close by, so there will be more than just the village children helped with this well.

CEED is also known for requiring domestic violence contracts from the villages where we know that it is an issue. If the village wants the well, the husbands must agree to be kind to their wives. So far it has been a very effective tool for improving the lives of the village
women on top of the other improvements that come from clean water.

And finally, the well will also bring water to 3 congregations and a second school a little further out. This well will benefit the whole community.

There are three churches in the area surrounding this proposed well spot, and where there is water, the outlying villages and bush people are more likely to come. While the well is being built, we take the opportunity to play the Jesus film in the local dialect to the people who gather to watch the drilling process. And everyone always comes out to see the drilling.
The well is and will be accessible to everyone who wants to access the well. It will be shared by the school, the churches and village

Bad news: Uganda has been getting a longer than expected rainy season, so all wells drilled in the past few months have had a delay in the cement casing and dedication phase.

Good news: The well has been drilled and casing was poured October 26.

We are now waiting on the plaques to be placed.  When that is done, a dedication ceremony will be held, and a final completion report will be sent.  Below are some pictures of the drilling and crowds of people gathered at the new well. 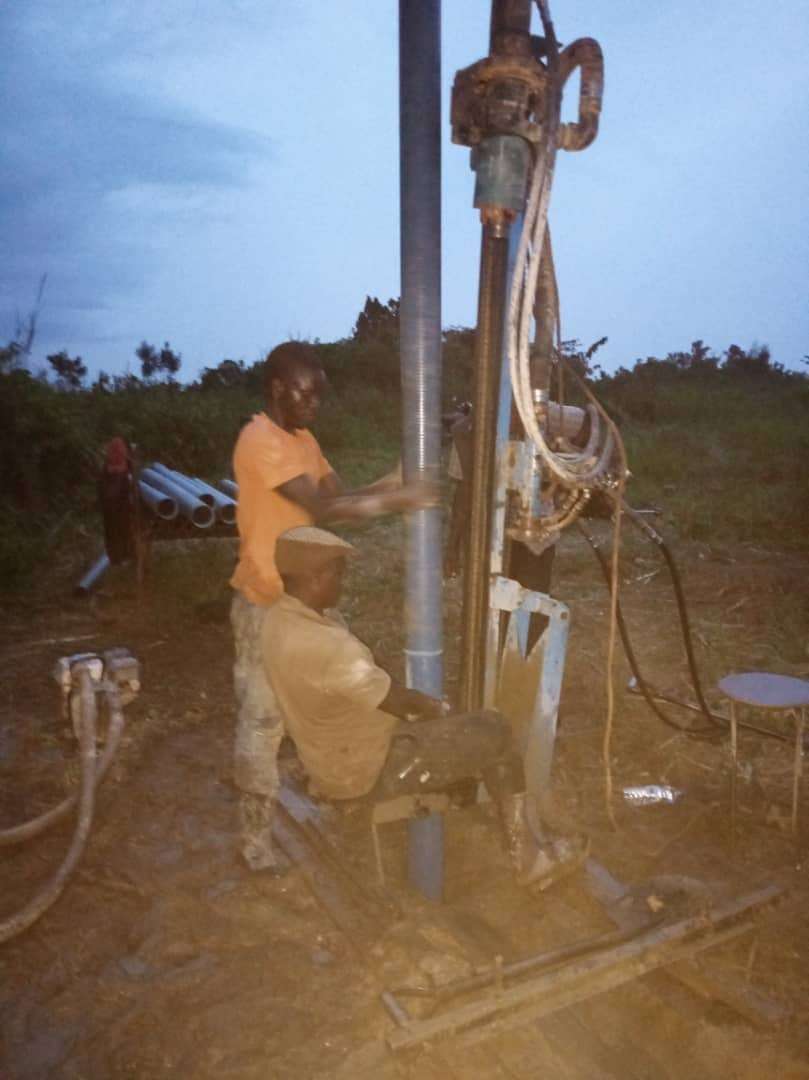 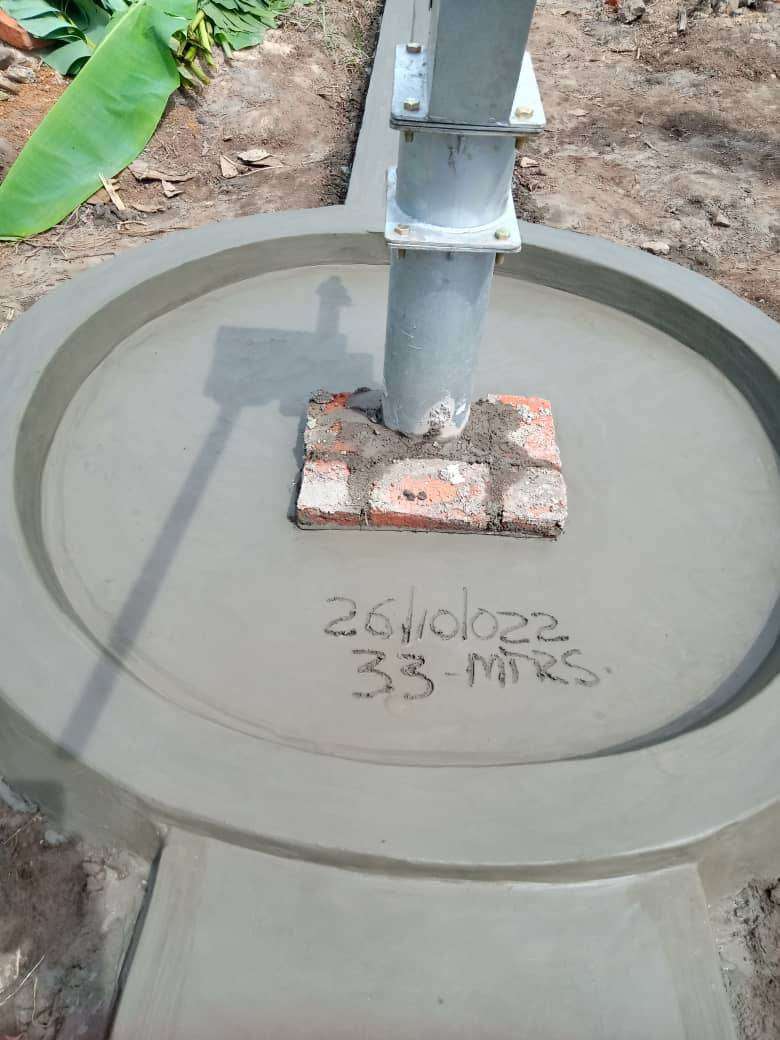 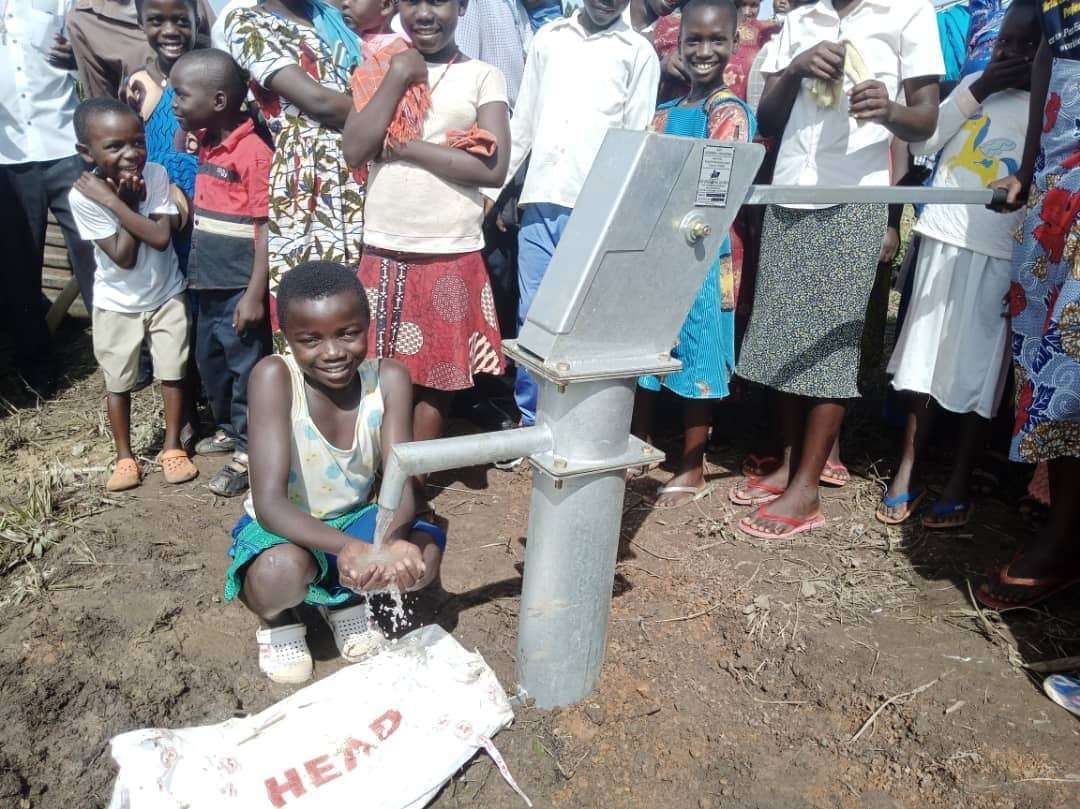 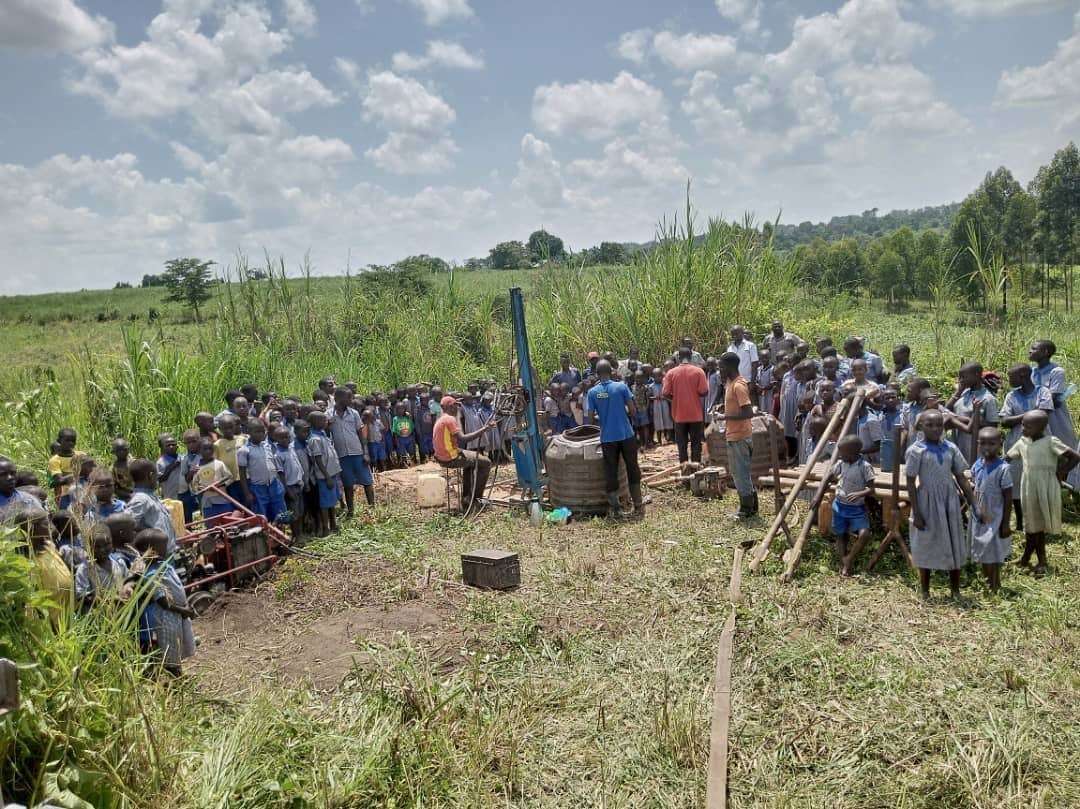 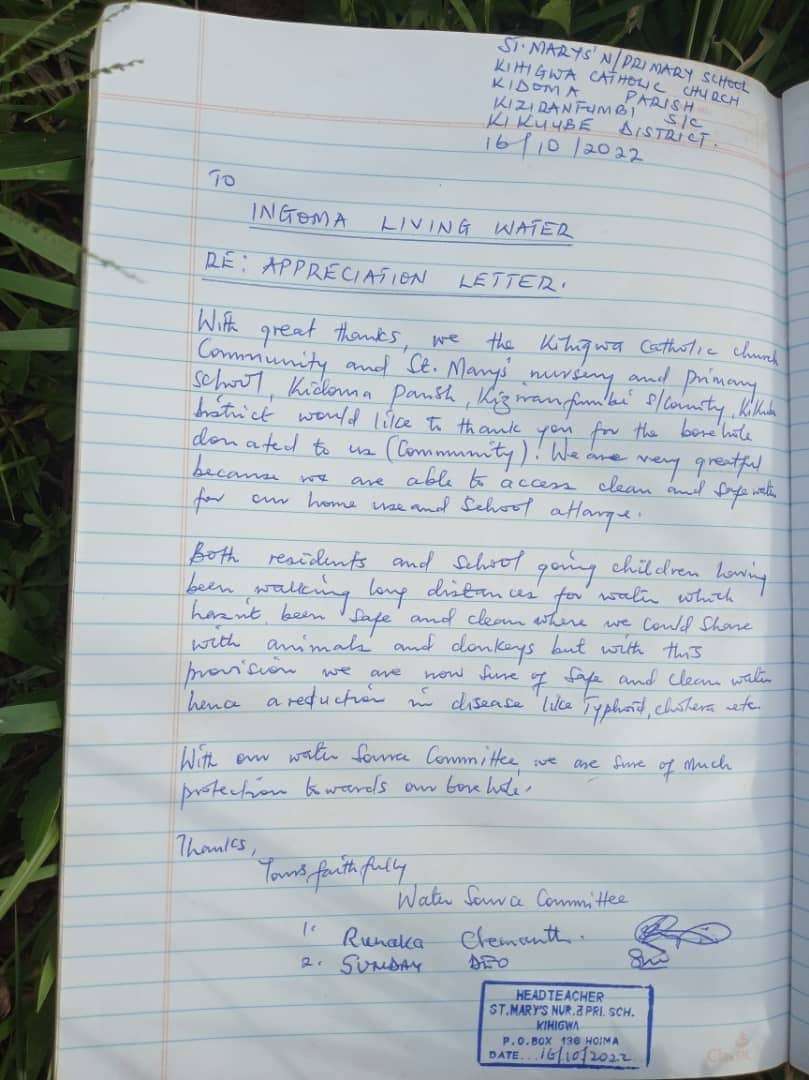 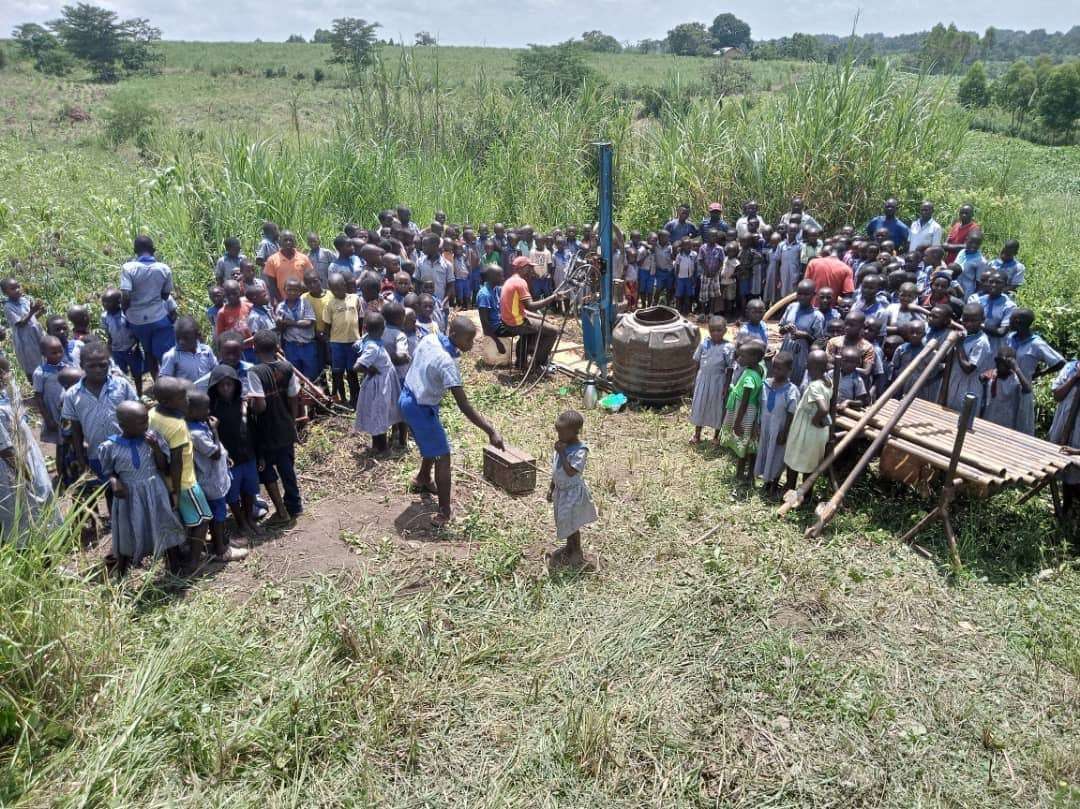 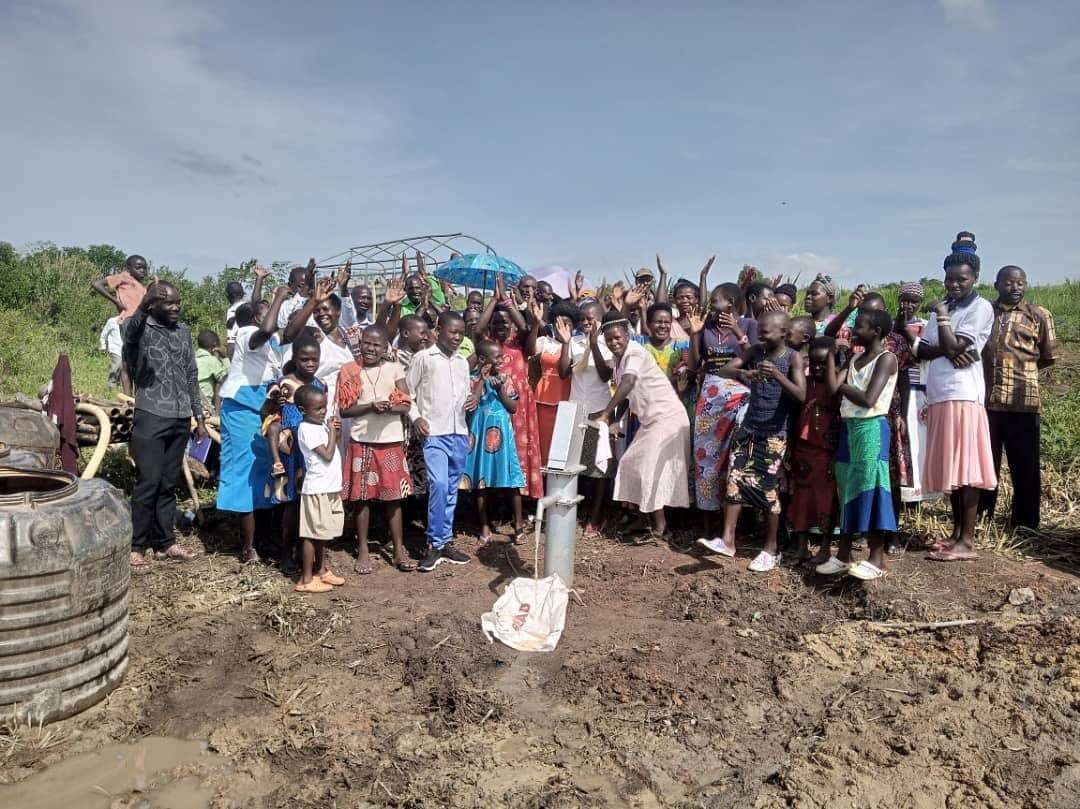