There are a couple wells in the community, but they are very shallow and dry up during the summer months causing long lines and disturbances due to people having to wait to collect water from the one working well. People cannot collect enough water for their families. Dehydration symptoms are high during the summer months putting young children at increased risk of death. Water borne illness such as dysentery, skin issues, Helicobacter Pyloriand, vomiting, and Typhoid are concerns due to using hand dug wells that are unsafe water sources. 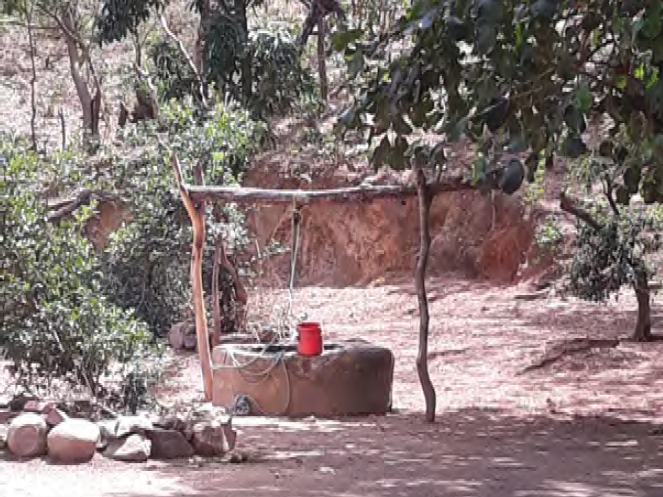 This shallow hand-dug well dried up during the summers. 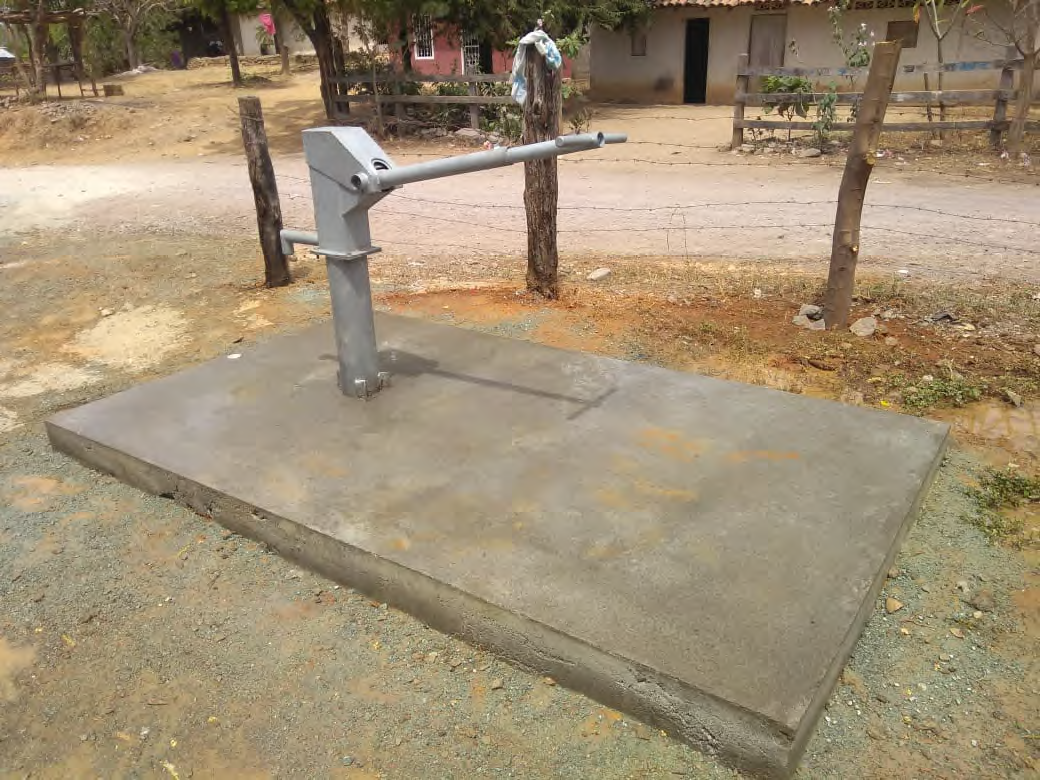 The La Flor community struggled under the burden of the water crisis. While the 467 residents had access to four boreholes with hand pumps, the wells were shallow. During the hot summer months, the water dried up in three of the wells, leaving the community members with only one functioning borehole that was some distance from La Flor. The women tasked with water collection could spend hours waiting in line for their turn to get water, only to be faced with a long walk home,
carrying heavy containers of water.

To make matters worse, the water in the wells was contaminated by bacteria and other pathogens that caused illness. Diarrhea, dysentery, and vomiting were all common in La Flor. Time spent recovering from these illnesses meant time away from work, chores, and in the case of the children of the community, school. But the residents had no other options, so they continued to use the contaminated well water and suffered the consequences.

It was a never-ending cycle of scarcity, need, and ill health that left the residents of La Flor longing for an escape. They knew that accessing water should not be so fraught with pain and trouble, so they began looking for help in ending their water crisis.

The leaders of the local Christian church, Iglesia Nueva Jerusalen, were praying for an answer to the community’s need for safe water. When church leaders heard of Living Water International’s work in the region, they knew they had the found the answer to their prayers. They contacted Living Water Nicaragua, requesting a borehole for the community and offering the church  grounds as a site for the future well. Living Water visited the community and determined that a well project was feasible.
Ingomar Living Water, you made it  possible for the staff to return with a drilling rig. The team drilled 62 meters into the earth to access an aquifer of safe water. They installed a PVC pipe, gravel pack, and a sanitary seal. They treated the well with a shock chlorination and tested the water to ensure it was safe for drinking. After installing a hand pump and laying a concrete base, the well was complete, and La Flor had safe water! 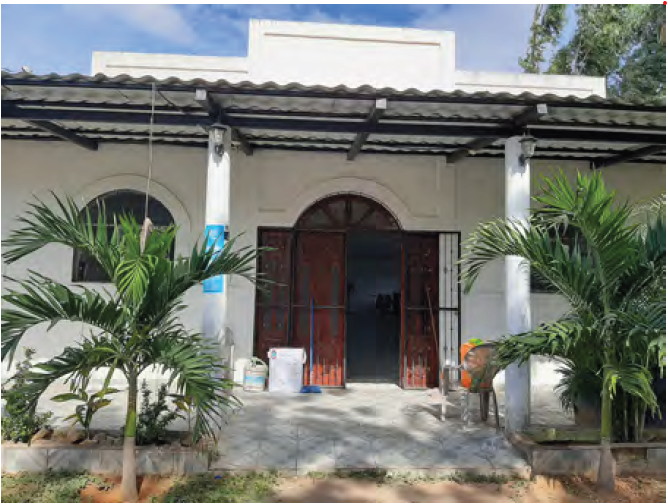 Iglesia Nueva Jerusalen Is the Christian church in La Flor. 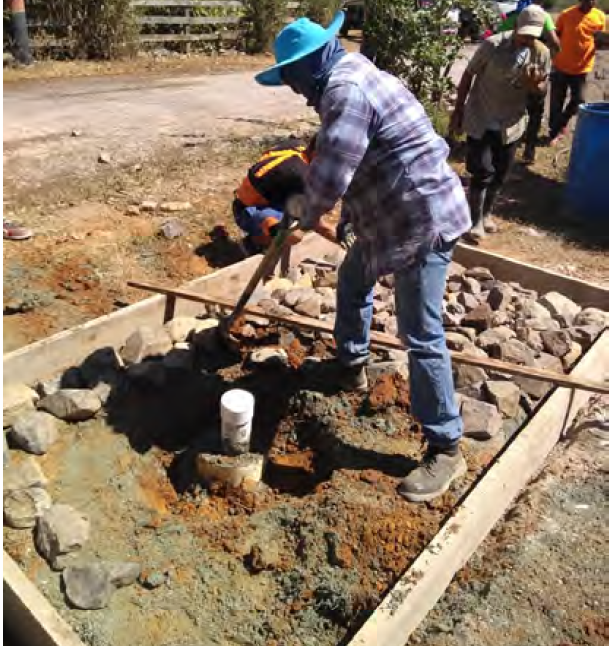 The staff is hard at work on the well. 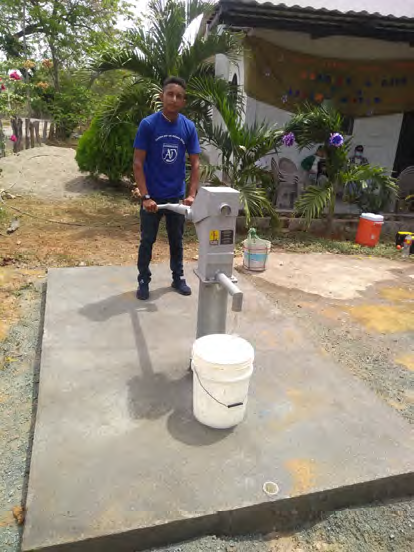 The Living Water staff helped the La Flor community establish sustainability practices to help ensure a future of safe water access. As part of this goal, the staff guided the community in the selection of a water committee. The water committee will oversee the care and maintenance of the well. Living Water trained the committee to care for the well on a day-to-day basis, set an operating budget, and follow a maintenance schedule. The committee will collect a small fee per household for water usage, which will be used for future repairs and maintenance. 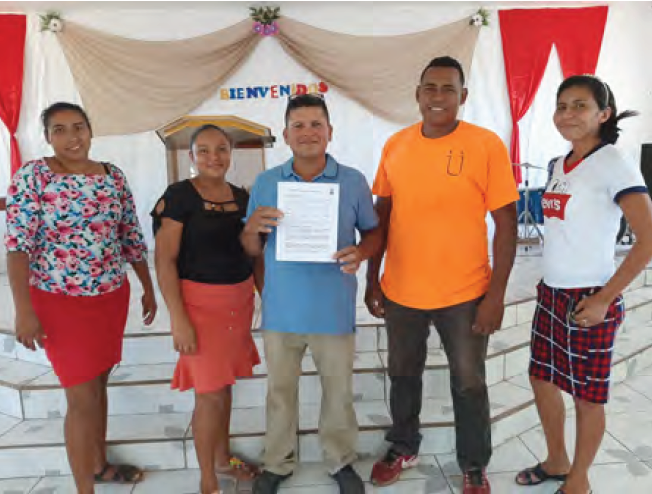 These individuals will serve as the water committee.

During the dry season from April to June, there were water shortages. The quality of the water was not very good. There were many problems with diarrhea and bacterial stomach infections due to the consumption of unsafe water. Sometimes it caused vomiting.
I imagine that the [new well] water will be much better and safer because it will be chlorinated water. We will have fewer diseases and most importantly, no water shortages.

In order to help the La Flor community members understand how to use the the safe water you gave them as a means of improving their health, the Living Water staff held a hygiene and sanitation promotion activity. These lessons were hands-on
and interactive in order to make them memorable and relevant to the 53 participants. The Living Water staff showed the participants how to properly wash their hands, which is the primary defense against the spread of disease and other germs. The team demonstrated thorough handwashing technique and then gave the participants the opportunity to practice. The team also went over oral hygiene, which is foundational to good health, and how to care for the new hand pump and safely store the water from the well. 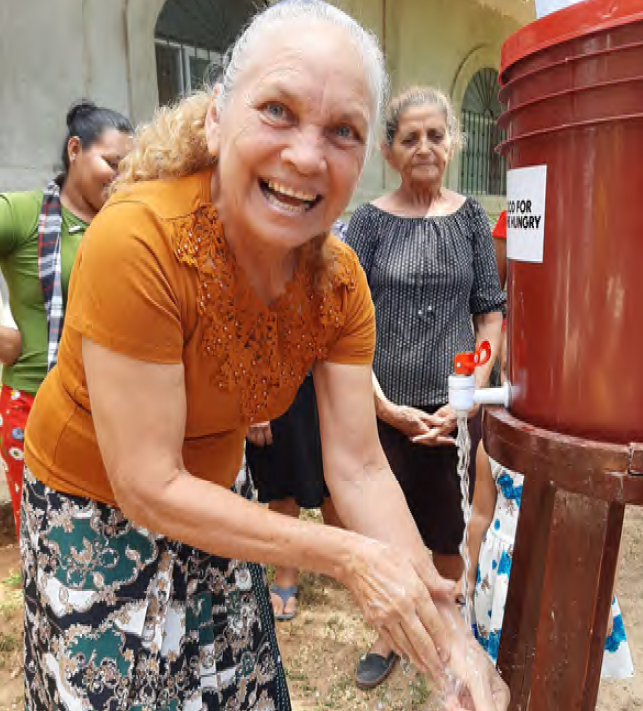 A resident practices washing her hands during a hygiene lesson.

In an outpouring of living water, the staff partnered with Iglesia Nueva Jerusalen to share God’s love with the community  members. This occurred through several evangelistic activities, including a well dedication service, where the residents heard
the good news of the gospel. Everyone present then joined together in prayer over the well, asking that God would use it to bless the La Flor community. Twenty-four pieces of gospel literature such as Bibles were distributed at the end of the service.

Community members display the bibles they received as gifts.

Ingomar Living Waters, safe water changes everything. And thanks to you, the La Flor community has experienced this life change. Because of your generosity, the members of the community now have abundant safe water right outside of their homes. They no longer have to wonder if they will have enough water for each day or suffer the effects of drinking unsafe water. Your gift has provided the community with the means to escape their water crisis and the patterns of scarcity and illness that trapped them in a reaction-based way of living.

Your willingness to serve as the hands and feet of Jesus has been such a blessing to this community. The residents are now assured of God’s great love for them, and the well now stands outside the church in La Flor as testament to God’s provision through his people.

Thank you for giving water, for life, in Jesus’ name.

This project was made possible by WORLD CHANGERS!