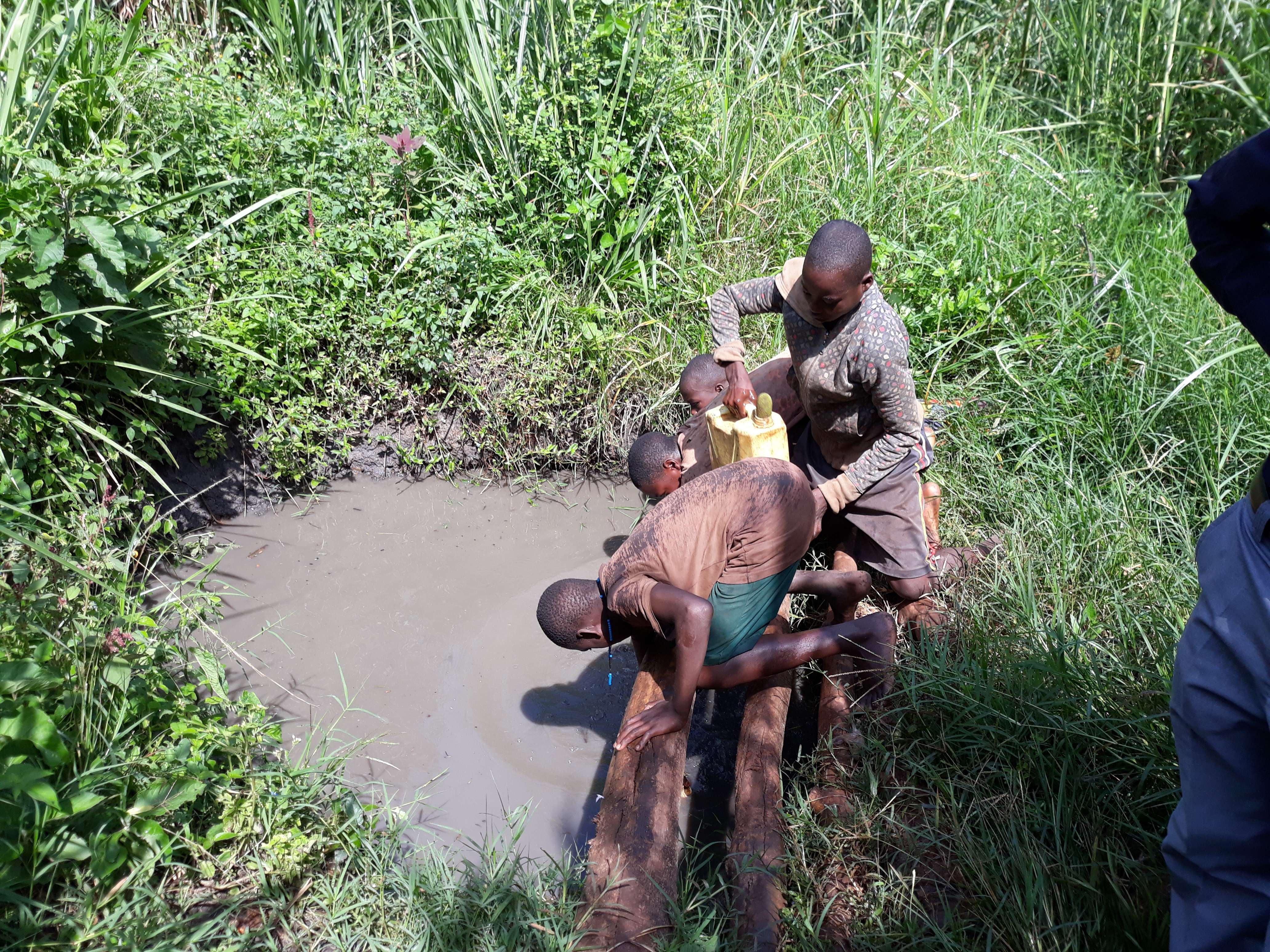 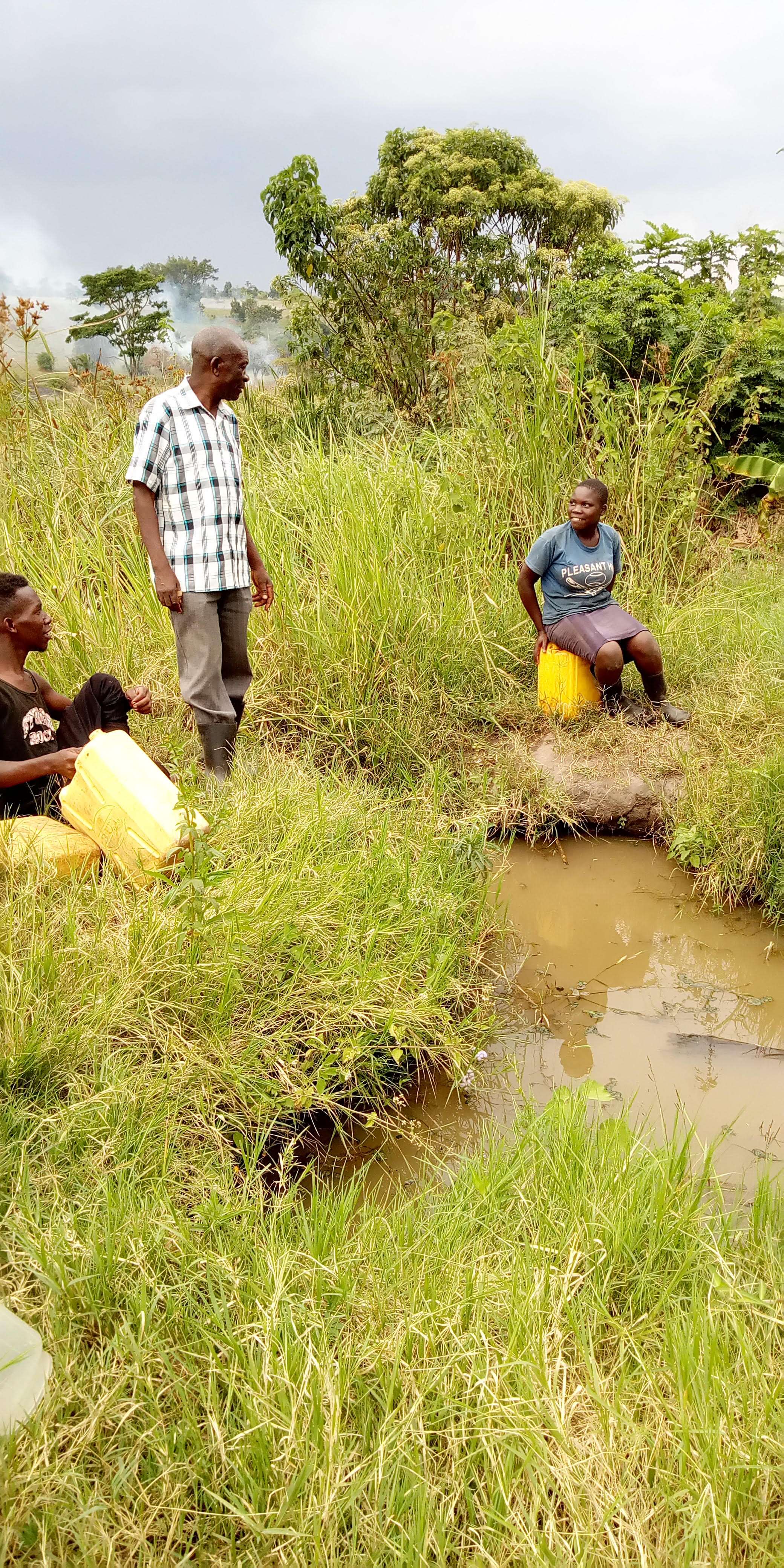 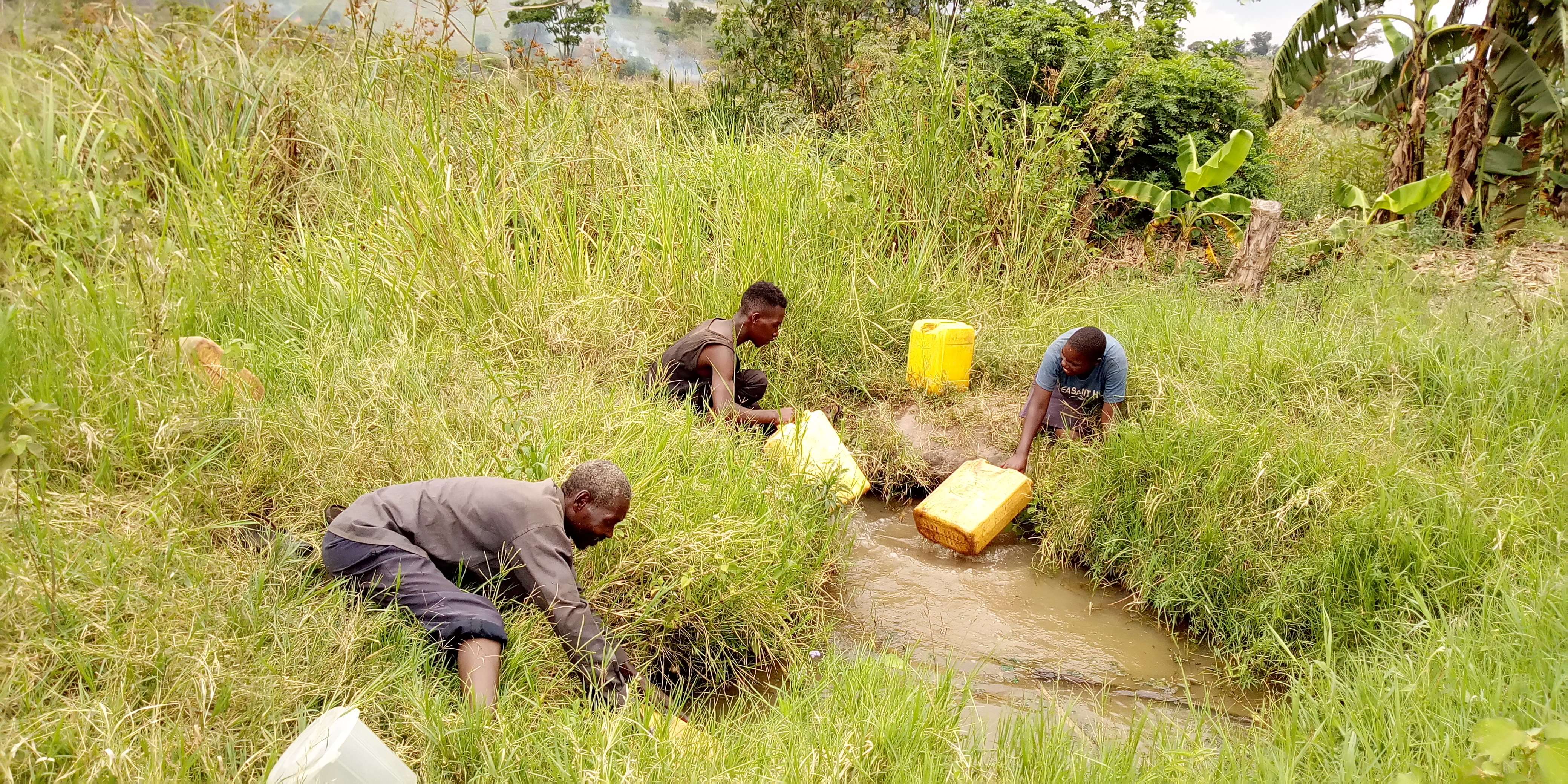 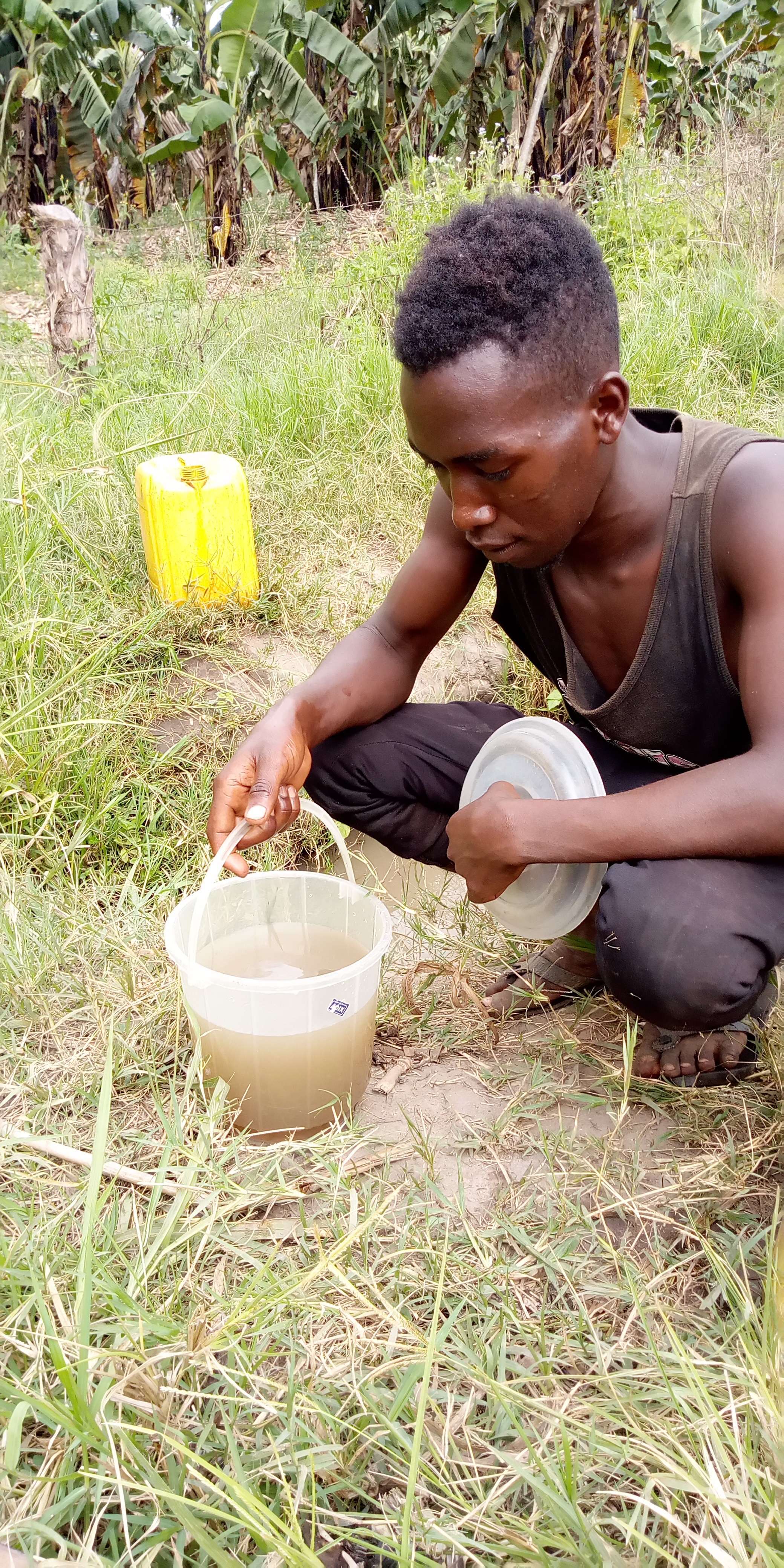 Kitandwe Village is a rural community in Kasanda district, Myanzi sub county, western Uganda.  Water scarcity is a serious problem here and in several neighboring villages that will also benefit from this well. Those villages are Lukiri LC1, Kyasseta LC1 and Kabojja, which has a primary school. Kitandwe and these surrounding communities are currently surviving on swamp water (stagnant water), which is drying up. The water source is shared with animals and poses a serious health hazard to the people.

The people, usually women and children of Kitandwe Village walk betweenone to two miles to fetch this dirty, contaminated water. Adding to the difficulty, the location of the water source is downhill and so the women and children must walk uphill back home with heavy containers of dirty water for their families to drink.

During dry spells, the villagers have even less access to water, or have no water at all, for household uses such as bathing and laundry. The people must go farther to find water in the dry seasons.

Water related diseases such as typhoid, diarrhea, cholera and skin diseases like scabies are common. Water scarcity has led to a decrease in crop production and livestock is affected.

Providing a well will make a huge impact on the community. They will have clean, pure water to drink, as well as for all of their household needs such as cooking, bathing, and laundry. They will be able to water their gardens and provide their livestock with clean water. The health of the community will improve dramatically. They will save what money they earn by decreasing money spent on medicine. People will not have to travel further and further away to find water during the dry seasons. 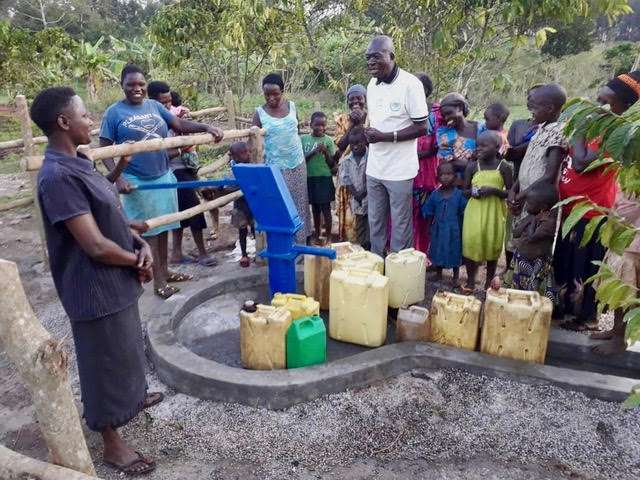 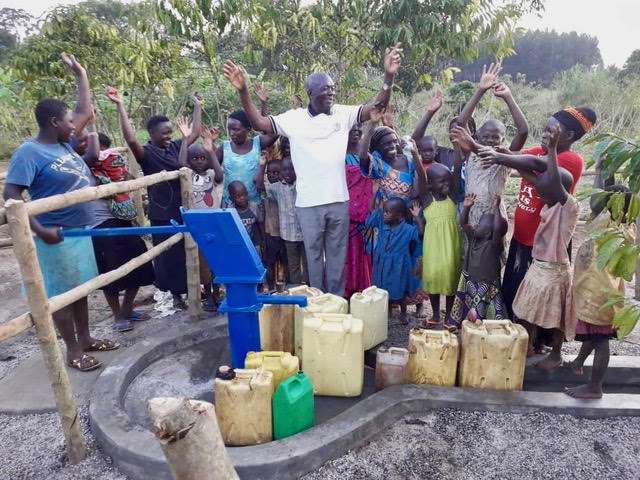 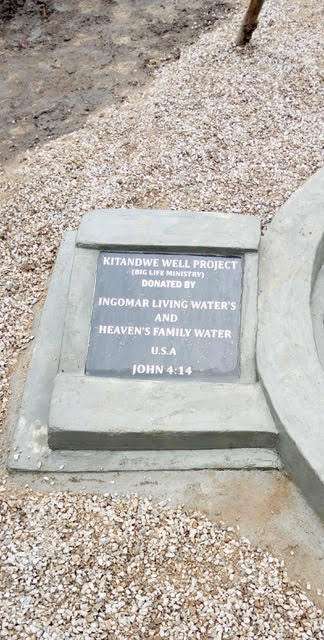 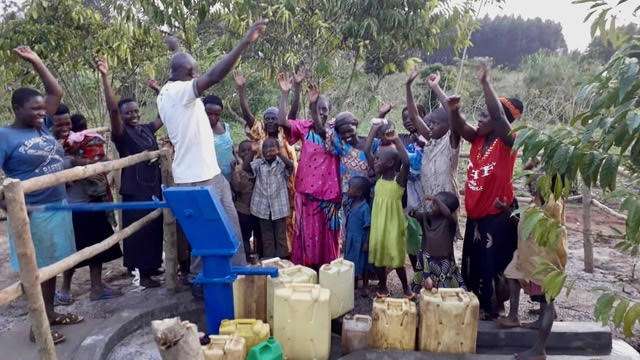 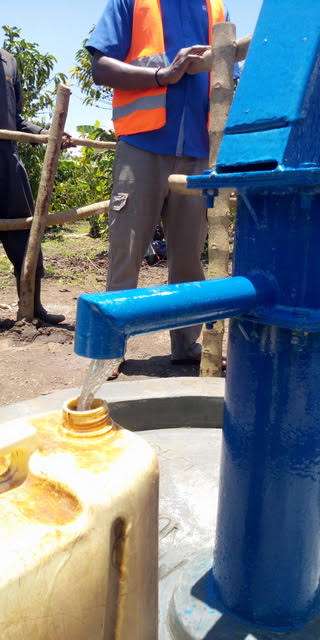 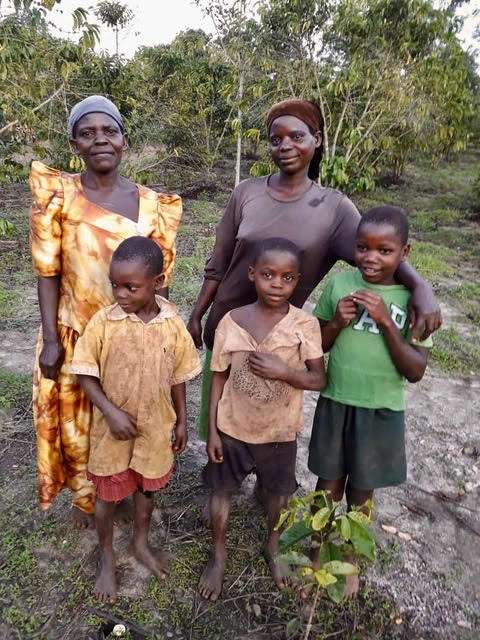 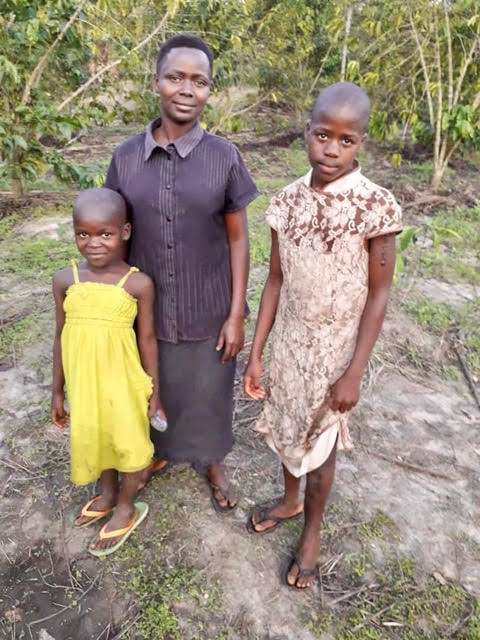 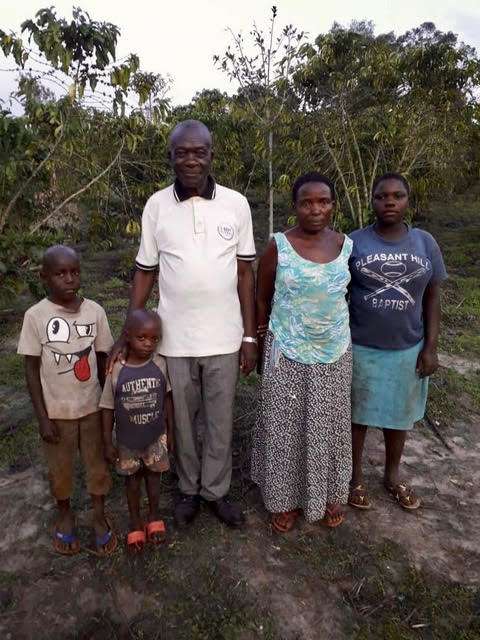 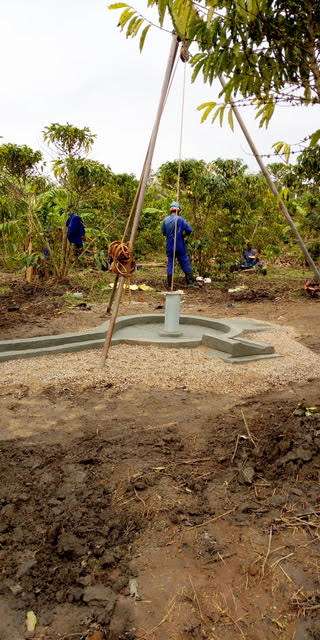 In the fall of 2019, the well was completed in Kitandwe Village, a rural village in western Uganda. When the well was given to the people of Kitandwe Village, they thanked God, Ingomar Living Waters and Heaven’s Family for the gift of water to the community. It was a moment of joy when the locals witnessed the first “official” pumping of the first jerrycan and the well was ceremoniously “handed over” to them. The villagers extend their endless thanks to Ingomar United Methodist Church, and Ingomar Living Waters, for providing them with safe clean water.

The problems solved by this well are numerous Previously, water scarcity was a serious problem and the people survived on stagnant swamp water which often dried-up. The lack of clean water was a serious health hazard to the people. Water related diseases such as typhoid, diarrhea, cholera and skin diseases like scabies were common. Water scarcity also adversely affected crop production and livestock.

Now, the villagers have clean, pure water to drink and to use for all of their household needs such as cooking, bathing, and laundry. They will be able to water their gardens and water their livestock with clean water. The health of the community will improve dramatically. They will save what money they earn by decreasing money spent on medicine. People will not have to go trekking further and further away to find water during the dry seasons.

Experiences and testimonies of some of the Villagers:

Mukiza Augustine is the vice-chairman of Kitandwe Vlllage and a father of 8. He used to regret being a resident of Kitandwe a place which lacked water since his childhood. He has been fetching water in a certain seasonal swamp which at times dried- up and often caused his family members to be afflicted with disease i.e., typhoid, diarrhea among other water-related diseases. He laments that hospitals became his second home as he would spend much of his little earnings for the treatment of his family. He thanks you for supporting his community by providing them with water which he thinks will now help him save the money he has been using to buy water expensively for other family basic needs. “May God bless you so much”

Elda Nabukenya is 60 years old and takes care of 5 of her grandchildren. Elda says water was her biggest problem in life because at her age she has lost strength in moving for more than 3km (1.9 mi) to fetch water, which she has been doing since her youth. She said that at times she would no shower or bathe herself for more than four days because of the little water they would have in the house. One jerrycan (5 gallons) would be budgeted for a week when there was no water available. Elda thought that it was God’s plan for them to suffer like that. She had no hope for anything better. She now believes she will live longer because of having access to clean safe water. “May God bless you”

Eva Nakawooya is 32 and a mother of 5 children. She believes that the extreme poverty of her family is connected to diseases caused by filthy water.  She explains that they were forced to sell sold their animals (cows) to pay for medical treatment for their children and themselves when they became ill with typhoid and diarrhea. She recalls a time earlier this year when three of her children were hospitalized for almost a month. This was caused by the dirty water they were using. She thanks you for supporting them by providing clean water. “May God always bless you”

Pastor David Mpanga is a resident of Kitandwe and is 69 years, married with 6 children. He says “We thank God for this borehole. Besides this project, we have managed to open up home churches where we have trained many people in discipleship. Water has been a big challenge all my life. You have came in for our rescue. We would move killometers to find such for water (dirty) in swamps and ponds where we shared with animals and after use caused alot of diseases to our beloved ones. Deadly typhoid and diarrhea had became common diseases, but through this support for safe-clean water, I believe that it will be history now. My prayer is that may the almighty God use you again to extend such service like this one of Kitandwe to many other places facing the same water challenge. We have brothers and sisters who are in trouble and still need intervention. I am also thankful to Pastor Jude and the team who have worked tirelessly in supervision to make sure this work is done successfully”. May God bless you.

Christine Nangombe is 68 years of age. As a head of the family, Christine works hard to put food on table for her grandchildren. She tells us that “in Kitandwe someone would easily offer you a meal rather than a cup of water”.  She repeatedly stated that her hope and confidence re-surfaced the first day when she heard that a Christian organization was going to offer to them safe clean water. She thanks you for helping the people of Kitandwe by donating to them safe clean water. “May God keep blessing you always”

This $3,000 project was made possible through the generosity of the  congregation of the Ingomar United Methodist Church.