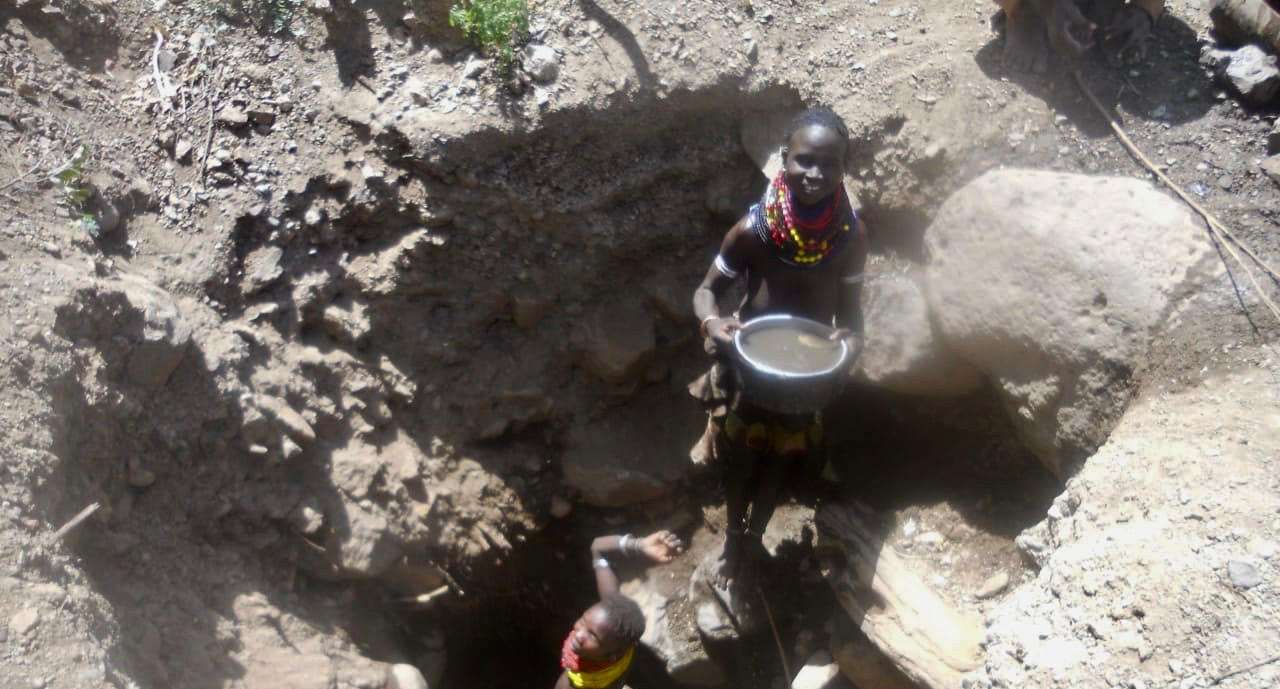 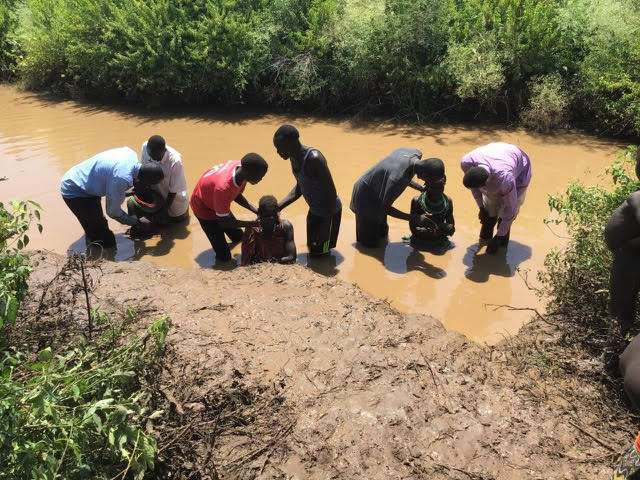 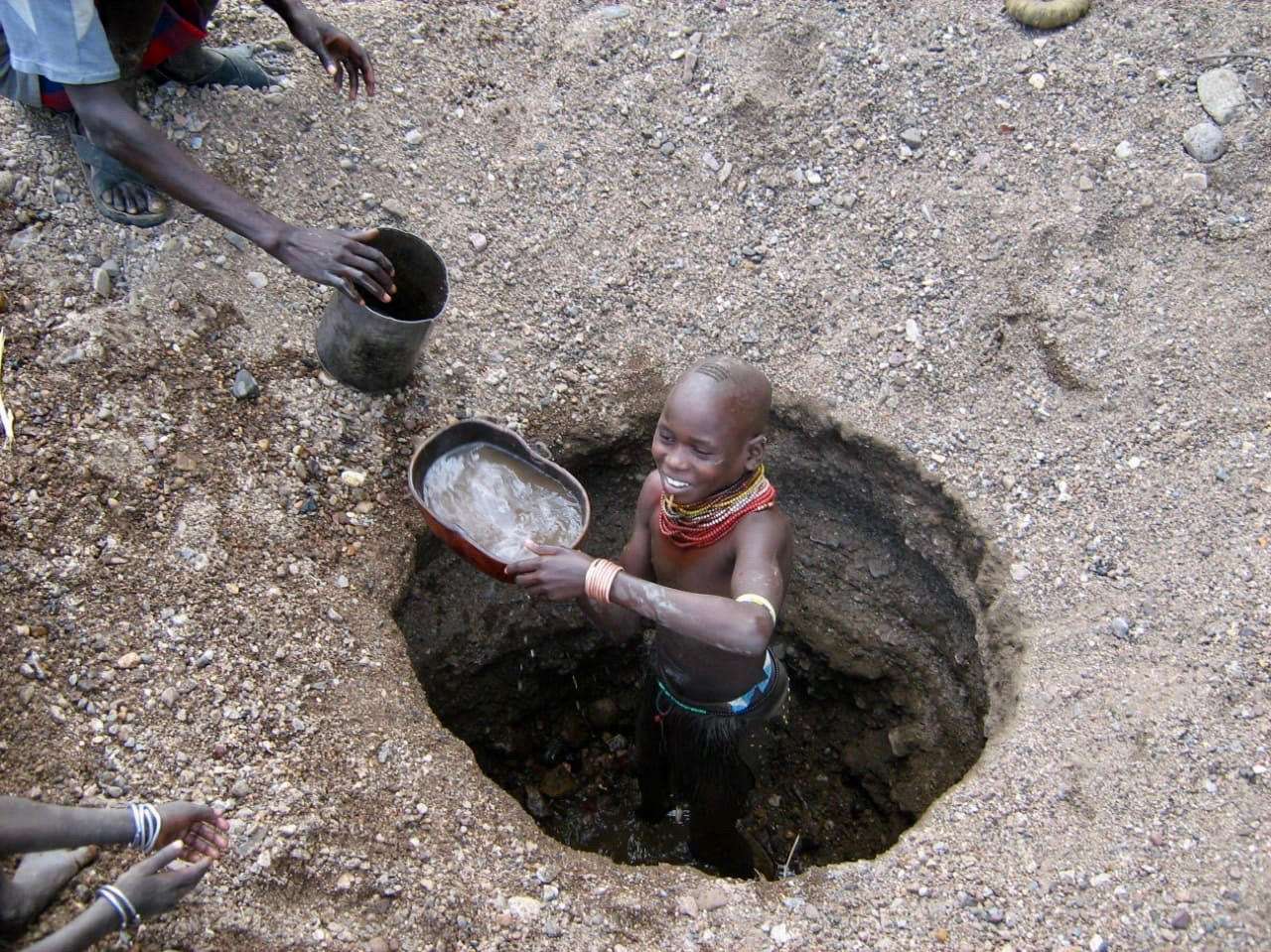 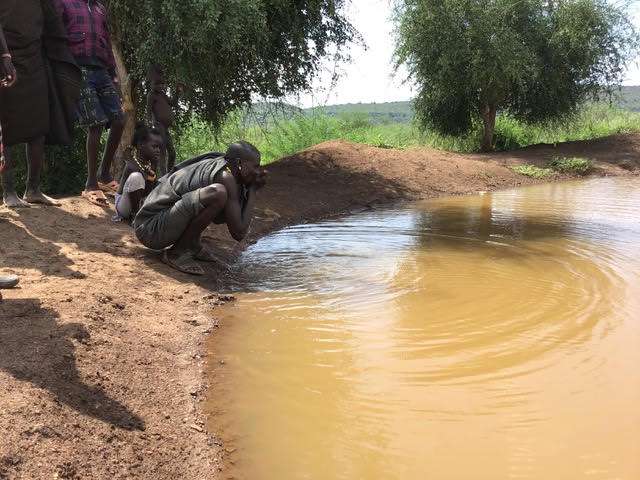 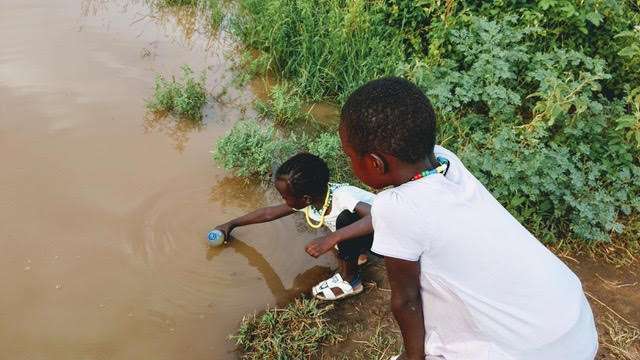 Nawoyapak Village (pronounced Na-wee-ah-puck) is located in Toposaland, South Sudan. The population is 1,800. Also, there is a sister village, Nubois Village (pronounced Nu-boys) with a population of 2,300. The well would be drilled in Nawoyapak to benefit both groups totaling 4,100 people. Both villages suffer the same, miserable current water situation. Neither location has any reliable clean water source. The members of both villages are desperate for water.

The members of these villages currently rely on the rain for all of their water. The rains come in late spring and last through the late summer/fall and stop as winter sets in. The water is collected in a large water pond which is dug by the people and fills with rain. The pond is relatively close to the villages, although the walk to the pond can range up to 1/2 mile. The water pond is almost full now, but it will dry-up as the winter goes on.

The pond is open and contaminated, shared with animals and becomes increasingly more contaminated with use. There is no secondary water source near them, so when the pond dries, the villagers then walk 50 miles and camp their families at a place called Kuron because all rivers flow there. They have to haul all of their belongings and will stay there for a few months, until the rain comes again in late spring and then walk 50 miles back home. Women suffer the most as they do just about all the work traditionally in this culture. They fetch water, look after their houses, the food, the fields, the kids, just about everything.

These villagers cannot permanently relocate to Kuron.  It’s not their ‘homeland’ (though it is Toposa tribal land), but rather is considered a ‘no man’s land”. It acts as a buffer zone between rival tribes. People do not want to live there as it could trigger a fight between tribes. Other migrating villages go to this same point, so it’s very disruptive for families. This lifestyle does not allow the children to go to school.

Water is their most urgent need. The villagers and their children are drinking mud water. They suffer from physical thirst and common water-borne diseases are dysentery and worms. People die every year because of the water they drink. Many moms in these villages tell of their children dying of diarrhea. The annual trek 50 miles away to Kuron has its own tragedies. During the last trip, an elderly man died of thirst.

They would love to stay settled in Nawoyapak (and Nubois), but they have no choice but to leave when the water dries up. Until now, no one has helped them to have clean water.

Providing a deep well here would be a huge blessing to the communities. It will be life-changing and life-saving. The people could stay home, safe all year round. The women would be rejoicing for their babies would be healthy and their workload would be so much lighter.

The funding for this well was provided by the congregation of Ingomar United Methodist Church with their Christmas 2019 offering.

The project is quite remote with no cell no internet. So, I didn’t get all this update until now. Along the way there were various delays. While onsite at Nawoyapak the rig had some kind of breakdown and needed a part to repair, but because of coronavirus restrictions for commerce they couldn’t get the part. – the rig is still sitting at the village. The drillers then brought in another rig all the way from distant Juba. (The 2nd rig is going to tow the other rig when they head back to base.) There is no internet to send photos so I don’t have any photos until they come back in.  Also, I asked him for the gps coordinates of the well. He will get those for me. So…

Praise God! The well has been successfully drilled! The pumping test is complete, the water is clean to drink, but the pump is not yet fixed. I will get more reporting in about a week or so. But, there is a twist that requires explanation! The project was to be drilled in Nawoyapak, but the geologist report (a geologist travels with the drilling team) showed the depth for reaching strong water was 180 – 200 meters  – too deep for a hand pump. A solar pump would be needed to drill successfully there. We did not have funding for a solar pump for this first project. So, they did drill at at secondary locations, got water at 90 meters, but insufficient to support the community reliably. The people were so sad and discouraged that the well was unsuccessful at their village, especially the women, they were crying. They have been encouraged to pray. Ultimately, the drillers agreed to move to the next village, Nubois. (Nubois Village is actually also listed on the PFR application with Nawoyapak, its the next village/lacks water with churches established there.) After necessary agreement was made with the village leaders of Nubois a geologist report was done and they drilled on designated property for community use. They are being prepared for future maintenance, same as Nwoyapak was. The water is strong and clean. The people of Nubois – rejoicing, running, singing, praying how they have received a well in their village.

This is a condensed recap. These circumstances happen once in a while where the driller will move to a second location if its reasonable for a successful result.

Praise God that the village of Nubois, a village that needed clean water just as much, now has clean water, yet it is disappointing the well for Nawoyapak was not successful. May he Lord be glorified in this unexpected result.

This project was made possible though Christmas Eve donations at Ingomar Church.